Alex Wins his 2nd Feature of the Season! Recap by Dan Margetta 6/24/12

Alex Prunty took the lead on lap 23 and drove to the victory in the 40-lap late model main event. 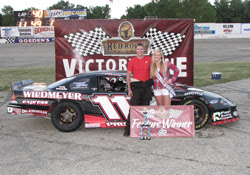 Jerry Mueller charged out to the early lead as Pat McIntee and David McCardle raced for second with Jon DeAngelis and Alex Prunty side by side behind them. McCardle drifted slightly on the outside which allowed McIntee, DeAngelis, and Dan Church to get by as Ryan DeStefano pulled alongside McCardle. As DeStefano and McCardle entered turn three side by side, they closed quickly on Church’s car and when DeStefano tried to avoid hitting Church’s car, he moved up which sent McCardle’s car hard into the wall to draw a caution flag. DeStefano restarted from the rear of the field as Mueller and McIntee led the field back to the green flag. The outside lane was not the place to be for McIntee and both DeAngelis and Prunty worked their way by on the inside for second and third respectively while Mueller maintained the lead.

Al Stippich also tried to race to the inside of McIntee and as they raced for position, both cars spun in turn one and the caution flag waved for a second time. Mueller held the lead on the restart as Prunty worked the inside line to take second place away from DeAngelis, who kept the third position by fending off DeStefano and Justin Poenitsch. With Mueller leading, DeStefano used the inside line to pass DeAngelis for third, bringing Braison Bennett along with him into fourth, moving DeAngelis to fifth. DeStefano then went to work on Prunty for second place but as they closed in on Mueller for the lead, Prunty took to the outside lane and made a bid for the top spot. Prunty was able to take the lead from the outside and when contact between Mueller and DeStefano briefly held up the field, Prunty opened up a sizeable lead. Prunty went unchallenged the rest of the way and captured the victory while Mueller held off DeStefano for second as Braison Bennett and Al Stippich rounded out the top five.

Thunder Stock Winner Tyler SchleyJerry Mueller was the winner of the late model fast dash and Alex Prunty was the fastest qualifier at 12.468 seconds.

Posted by Alex Prunty Racing at 9:34 AM