Race Recap at the Slinger Speedway 6-17-12 : By Dan Margetta

Ryan DeStefano scored the win in the 35-lap late model feature for the second week in a row, holding off Dan Church for the victory.

Justin Poenitsch and Dave McCardle led the field to the green and McCardle raced into the early lead from the outside as Poenitsch fell in line for second just ahead of Alex Prunty and DeStefano. Prunty worked his way around Poenitsch for second as McCardle continued to lead as Dan Church, Braison Bennett, and Pat McIntee also passed Poenitsch who began to fall back on the outside along with DeStefano who was also caught on the high side. Meanwhile back up front, Prunty caught McCardle and after a few checks to the inside, took to the outside lane in a bid for the top spot. McCardle and Prunty raced several laps door to door for the top spot.

McCardle wiggled slightly off turn two on lap 13 which gave Prunty a small run on the outside entering turn three, however as Prunty tried to pull back down to the inside, the nose of McCardle’s car was barely there and the slight contact sent Prunty’s car spinning around where it was struck cosmetically by DeStefano as he tried to skid to a stop. Both Prunty and DeStefano were able to continue as McCardle and Prunty were placed at the rear of the field for their involvement in the caution, leaving Dan Church and Braison Bennett to lead the field back to green with DeStefano and McIntee directly behind them. Bennett and Church batted alongside each other for the lead over the next three circuits with Bennett having a slight advantage over Church from the outside. The handle on Bennett’s outside run went away on lap 16 as the back of his car swung around in turn four, drawing a caution flag and leaving Church as the leader over DeStefano, Poenitsch and McIntee. Church and DeStefano fought for the lead as racing resumed with Church on the inside and DeStefano holding strong on the outside.

On lap 19, Church had difficulty holding his car on the inside and as it walked up the track in turn four, DeStefano took control of the lead as Poenitsch raced by Church and into second. DeStefano maintained the lead in the second half of the race through two more caution periods for minor incidents and in the closing laps, the handling went away on Poenitsch’s car and he exited the track as Prunty and McCardle recovered from their earlier spin to charge back into the top five. DeStefano drove to the win over Church while Prunty worked his way back into third place just ahead of McCardle in fourth. Pat McIntee was fifth. 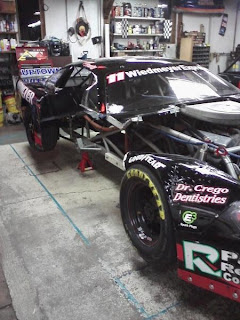 Justin Poenitsch won the late model fast dash and Braison Bennett was victorious in the heat race. Alex Prunty was the fastest qualifier at 12.440 seconds.