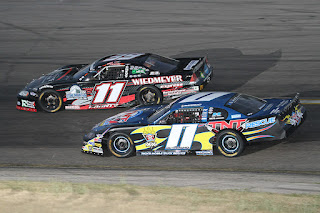 Casey Johnson took the lead on lap 21 and went on to capture the win in the 35-lap late model main event over Alex Prunty.

Jerry Mueller and Andy Welter led the field to the green flag with Mueller taking the early lead from the inside. The low groove was the place to be early on as Ryan DeStefano and Alex Prunty used it to advance to second and third as Welter dropped to fourth racing on the high side. The first caution flag appeared on lap three when Justin Poenitsch’s car looped around in turn one with Mueller leading over DeStefano and Prunty.

Mueller chose the inside for the restart and as racing resumed, maintained the lead as the caution quickly flew again when DeStefano tried to fill the gap on the inside entering turn three and was tagged by Prunty, sending DeStefano spinning around in turn four and relegating both DeStefano and Prunty to the rear of the field for the restart. Mueller again held the lead as the race went back to green with Welter holding down second just ahead of John DeAngelis and Casey Johnson who raced side by side for third. As Mueller began to ease away from the field, Welter, Johnson and DeAngelis fell in line single file as Braison Bennett joined the front runners while both DeStefano and Prunty began to slice their way forward as well. Johnson used the outside lane to take second from Welter as DeStefano and Prunty first picked off Bennett and went to work on DeAngelis in fourth.

As Johnson closed on Mueller for the lead, DeStefano and Prunty used the outside groove to pass DeAngelis to move into third and fourth respectively. Johnson tracked down Mueller out front and took to the outside in a bid for the lead, racing side by side for two laps before clearing Mueller for the lead on lap 21. While the leaders were battling, DeStefano and Prunty closed on Welter in third and with Welter racing on the low side, Prunty got the advantage as he used the outside to first pass DeStefano and then Welter to move into third while DeStefano also worked his way around Welter to take over fourth. With Johnson extending his lead, Prunty tracked down Mueller and following a spirited battle, used the outside to grab second, leaving Mueller and DeStefano to dispute third. Johnson would not be denied in the closing laps and he drove to the victory over Prunty while Mueller held off DeStefano for third as the two made contact at the strip, sending Mueller’s car hard into the turn one wall and damaging the front of DeStefano’s machine. Andy Welter finished in fifth.

Jerry Mueller won the late model fast dash while Braison Bennett scored the victory in the late model heat race over Justin Poenitsch and Andy Welter. Alex Prunty was the fastest qualifier with a lap of 12.409 seconds
Posted by Alex Prunty Racing at 5:02 PM