Solid Points Night for the 11!

Alex set fast time and went on to finish 5th in the feature, growing his points lead to 94 points with just 3 races remaining in the 2012 Slinger Speedway season!
Posted by Alex Prunty Racing at 1:24 PM

Alex Claims 5th Feature of the Season! By: Dan Margetta 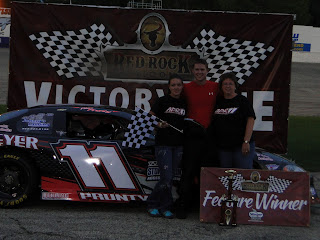 Alex Prunty took the lead on lap 16 and drove to his fifth late model feature victory of the season in the 35-lap late main event, taking the checkered flag ahead of Ryan DeStefano and Casey Johnson

Justin Poenitsch and Dan Church led the field to the green flag with Poenitsch taking the early lead from the inside lane as Church slotted in behind him. Poenitsch managed to maintain the top spot despite many Church’s many looks to the inside as behind them, Alex Prunty, Ryan DeStefano, John DeAngelis, and Casey Johnson all raced side by side for position. Andy Welter’s trip through the turn four grass produced the first caution flag on lap 14 with Poenitsch leading over Church, Prunty, and DeStefano. Poenitsch chose the inner groove for the restart and once again charged to the point as racing resumed with Church once again tracking directly behind him. The complexion of the race changed a lap later when Poenitsch looped around in front of the field off turn four following contact from Church as they battled for the top spot drawing the caution flag once again. Poenitsch and Church were relegated to the rear of the field for the restart leaving Prunty with the lead over DeAngelis, DeStefano, and Johnson. Prunty and DeAngelis battled fiercely for the lead as racing resumed with Prunty on the bottom lane and DeAngelis alongside in the high groove with the left side of DeAngelis’ car glued to Prunty’s right side in the middle of the corners. After several laps of side by side racing, Prunty prevailed from the inside and claimed sole possession of the lead as DeStefano, Johnson, and Mark Kissinger moved up to challenge within the top five. A final caution flag slowed the field on lap 21 for an incident between Jerry Mueller and Dan Church in turn one and as the field lined up to restart the race, Prunty again chose the inside, leaving DeAngelis the outside lane. As the green flag reappeared, Prunty maintained the lead while DeAngelis had difficulty finding grip on the outside as first DeStefano and then Johnson slipped by on the inside and into second and third respectively. Braison Bennett also worked his way around DeAngelis to move into fourth as the laps wound down. However, there was no catching Prunty in the final laps as he drove to his fifth feature win of the season, crossing the stripe ahead of DeStefano and Johnson while Bennett and DeAngelis rounded out the top five. 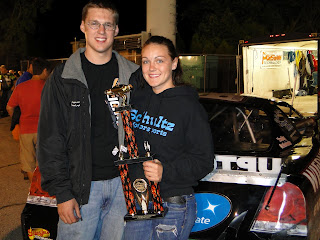 Dan Church was the winner of the late model fast dash while Braison Bennett won the late model heat race over Al Stippich and Mark Kissinger. Casey Johnson and Jerry Mueller were fourth and fifth respectively. Alex Prunty was the fastest qualifier in the late model division with a lap of 12.298 seconds.