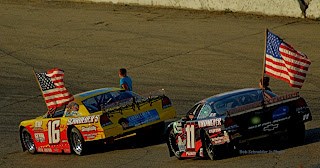 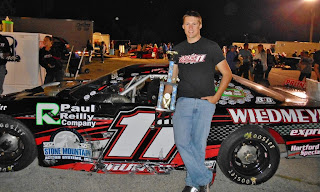 Jack Stern used the outside lane to lead the early laps before Lichtfeld took over the top spot with an aggressive pass in turn one. After Lichtfeld took the lead, Stern tried to make the high line work but despite being persistent, he gradually faded to fifth as Ryan DeStefano, Dan Church, and Alex Prunty all raced by on the inside. While the top two remained steady, Prunty used the high lane to grab third from Church while Adam Peschek entered the top five in fifth. A hard lick into the turn three wall by Tim Lange drew the first caution flag on lap 29 and as the field lined up for the restart, Prunty took advantage of the cone as he chose to test the outside and lined up next to Lichtfeld who continued to lead. As racing resumed, Lichtfeld and Prunty fiercely battled for the lead, trading paint on some laps before the caution flag waved again on lap 31 when John DeAngelis hit the turn three wall following some hard racing with Jerry Mueller. Just after the caution was shown, Bennett looped his car in turn four and the ensuing traffic jam damaged the cars of Tyler Schley, Jack Stern, and Justin Poenitsch. Lichtfeld and Prunty renewed their battle for the lead on the restart with Lichtfeld in the low lane and Prunty working the top. Lichtfeld’s car kicked loose slightly entering turn one which in turn twitched Prunty’s car loose as well as both drivers maintained control but behind them, Dan Church’s car washed loose after he attempted to allow Lichtfeld and Prunty to save their cars. As Church tried to straighten his car, contact was made with Braison Bennett and Bennett’s car momentarily ramped over Church’s machine as he tried to pass by on the inside. The result was Bennett’s car sliding through the infield and the caution flag waved as cars scattered behind him. Officials deemed the situation was set up by incidental contact between the lead cars and all drivers maintained their positions for the restart. This time Prunty, as the leader, chose the inside line and left Lichtfeld to take the outside groove. The decision paid off as Prunty was able to charge into the lead and hold off Lichtfeld over the final four laps and secure the victory. Lichtfeld finished in second while Ryan DeStefano took the checkered flag in third. Braison Bennett and Adam Peschek rounded out the top five in fourth and fifth respectively.


Ryan Farrell and Mike Lichtfeld were the winner of the late model heat races while Alex Prunty set fast time with a lap of 12.632 seconds.
Posted by Alex Prunty Racing at 6:28 PM