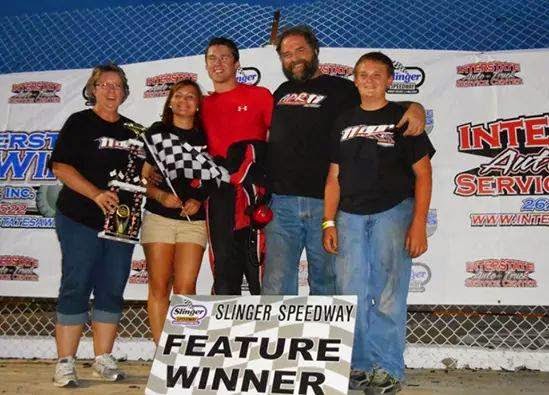 Mike Held forged ahead to lead the opening laps as Alex Prunty quickly slid into the second spot with Jack Stern, Ricky Heinan, and Dan Church close behind. A minor tangle between Jerry Mueller and Andy Evraets in turn three on the third lap bunched up the field causing Tyler Schley to hit the wall hard as the caution flag waved. Prunty was ready on the restart and he was able to charge ahead of Held for the lead as racing resumed, leaving Held to fend off Church and Stern for second. Church and Stern both made their way around Held for second and third respectively before the second caution flag waved on lap 10 for a spin by Corey Funk in turn four. Prunty maintained the lead over Church on the restart as two laps after the green flag appeared, the field slowed again when Grant Griesbach was tagged in the back while trying to edge inside of Ricky Heinan for the fifth spot, causing Griesbach to loop around and collect Steve Scheel and Andy Evraets. Al Stippich was also judged to be part of the incident and he restarted from the back as Prunty and Church lined up to duel for the lead once again. This time Church was able to gain the lead as the race got underway once again but Prunty remained in his tire tracks as it was evident the two would settle the outcome. Prunty took to the outside in the final laps and he and Church raced side by side for several circuits with Church able to keep the lead from the inside. On lap 33, the leaders approached lapped traffic and with a lapped car directly in front of Church in the inside lane, it was all Prunty needed to take the lead from the outside. Prunty then drove to his third feature victory of the season, leaving Church to finish a strong second. Wayne Freimund took the checkered flag in third place while Ricky Heinan and Jack Stern rounded out the top five.