Zielski charged to the lead at the start as Tyler Schley and Kyle Chwala followed in second and third as farther back Mike Held and Alex Prunty began to work their way forward. A spin by Brittiny Helmers in turn two drew the first caution flag on lap 18 with Zielski leading over Schley, Chwala, Held, and Prunty. Zielski and Schley chose the inside for the restart while Chwala went to the outside and the move paid off as he was able to edge ahead of Schley for second just before the caution waved again on lap 21 for debris on the speedway with Zielski still leading. Zielski again chose the inside as racing resumed and he was once again able to keep the lead as Chwala slotted into second again just ahead of Schley and Held. Chwala made several attempts to edge to the inside of Zielski but each time came up short and when Chwala’s car began to slide off the corners, Zielski was able to pull away slightly. Zielski would not be caught over the final laps and he drove to the victory ahead of Chwala who settled for second at the finish. Tyler Schley finished off an impressive race with a strong third place showing and Alex Prunty finished fourth after passing Mike Held late in the race, leaving Held to finish fifth
Posted by Alex Prunty Racing at 10:09 AM

Double Duty Weekend Ends with a BIG WIN in the Alan Kulwicki Memorial Race in Slinger! 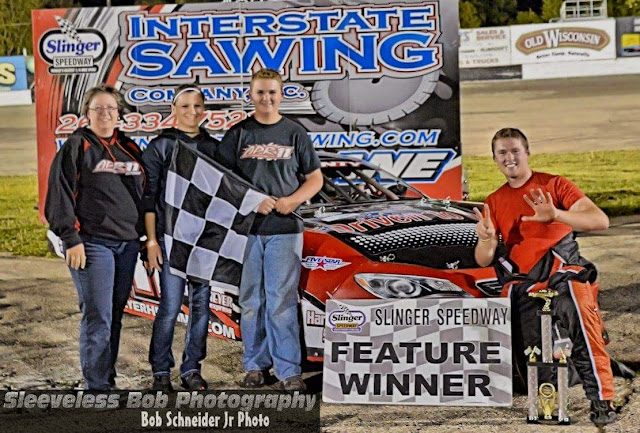 Tyler Schley and Kyle Chwala brought the field to the green flag and Schley drove to the early lead from the inside groove as Ricky Heinan, Brian Holtz, and Alex Prunty battled behind the lead duo. Chwala applied heavy pressure to Schley for the lead, trying both the inside and outside grooves to get by which allowed Heinan and Prunty to close in. As the leaders worked lapped traffic, Schley was able to maintain his slight lead over Chwala while Prunty was able to use the traffic to get around Heinan for third. After numerous attempts to take the lead from the outside, Chwala’s car lost traction on lap 15 and he spun off turn two and the caution flag waved as Tyler Hromadka’s car spun as well. Schley chose the inside lane for the restart while second place Prunty went to the outside with Heinan and Mike Held lined up in order behind them. Schley was able to hold onto the lead for a single circuit as racing resumed before Prunty powered by on the outside, bringing Held along with him. Heinan also was able to advance around Schley in the waning laps for third, leaving Schley to race with Jordan DeVoy over fourth. Prunty was able to keep Held at bay and he drove to the victory, leaving Held to settle for second. Heinan took the checkered flag in third while an incident between Schley and DeVoy coming to the checkered flag in which DeVoy’s car spun off turn four was under review at the time of this article. DeVoy was scored fourth and Al Stippich fifth with the official results pending.

Late model heat races were won by Grant Griesebach who held off Joe Bongiorno for his first victory in the division and Jerry Mueller who muscled his way around Kyle Chwala on the final lap. Alex Prunty was the fastest qualifier with a lap of 12.203 seconds.
Posted by Alex Prunty Racing at 6:59 PM 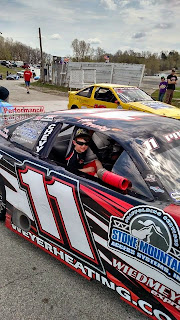 Ricky Heinan and Jack Stern paced the field to the green flag and Heinan drove to the early lead while Stern raced with Brian Holtz and Jordan DeVoy for the second through fourth spots. Behind the top four Kyle Chwala and Mike Held began to work their way forward just before the caution flag waved on lap nine for a spin by Joe Bongiorno in turn two. Heinan led the first lap back under green but then slid loose off turn four which allowed Stern to take command from the outside and bring Held along with him into second. Stern paced the event for a few laps before Held tracked him down and took the top spot with an inside pass just before the caution waved again on lap 33 Tyler Schley’s car looped around off turn two. While under the caution period it was determined the car of Tyler Hromadka was leaking fluid and during the clean up Stern left the speedway with some sort of mechanical issue. That advanced Chwala to the second position and he lined up alongside Held for the restart with seven laps to go. Held would not be denied however and he drove to his first career feature victory while Chwala took the checkered flag in second. Alex Prunty sliced his way forward in the closing laps to finish third while Ricky Heinan and Grant Griesbach rounded out the top five.
Posted by Alex Prunty Racing at 10:27 AM 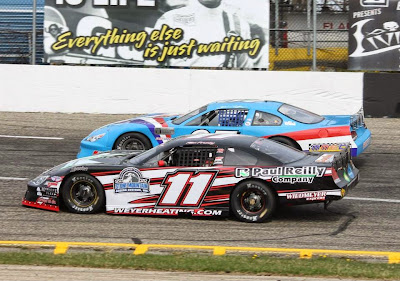 The Super Late Model race at Dells Raceway Park quickly turned to chaos as they came out of corner number two on the second lap. The front row of Ken Reiser and the number 44 of Mike Lichtfeld got together, causing Lichtfeld to spin directly in front of the field. The 25 of Jeff Storm, 87 car driven by Collin Reftner and the number 11 Bobby Kendall where all victems of the wreckage. Storm and Kendall where able to drive their cars into the pits. Unfortunately, the 87 car diven by Reftner had to be pulled off the track with a wrecker, ending his night early. Neither Reiser nor Lichtfeld honored the Gentleman's Agreement by claiming fault of the wreck, resulting in both drivers losing their positions on the front row and they where both sent to the back of the pack. Before our Flag man Arne Thompson was able to bring the field back to green flag racing, Ken Reiser pulled into the pits for an unknown reason and Kendall was able to make it back onto the track to take the restart. As the cone was put out on the back stretch, Frank Nitzke and Tim Schendel chose the outside groove behind the leader of Alex Prunty. As the green flag was dropped, an immediate combat broke out between Schendel and Ben Pettis for the third position. For a short while, Pettis was able to hold off Schendel but not for long! It only took 6 laps of green flag racing for Tim Schendel to work around Pettis and slide past Nitzke into second place. After being sent to the back on the first lap, the 44 machine of Lichtfeld was able to gain 7 positions in only 10 short laps! Schendel was able to obtain the lead from Prunty, but Prunty was holding on strong to the back bumper of Schendel. Pettis and Nitzke fought a long hard war against each other for the fourth position, Brian Johnson, Jr. took the opportunity to follow Pettis past Nitzke. With thirty laps to go, Greg Pawelski was still holding onto a strong 5th place position. As Prunty gave it his all on the outside lane to hold off Pettis, he just couldn't hold on long enough. With Pettis in second and 24 laps to go, Cory Jankowski spins on his own while exiting turn 4. After a short caution, Schendel immediately pulled away from the field, Pettis took second and Johnson fell into third. Just before 10 laps to go, Lichtfield passed the 17 of Johnson. During the last ten laps, a lot of space accumulated between the top three drivers. As they approached the 5 laps to go mark, Storm was able to close in on Prunty, which detonated an exciting side by side battle for 5th place. Ultimately Storm came up short, finishing in 6th place. "We all need a little luck now and then." Tim Schendel said gratefully referring to his victory, especially after a difficult off-season. Second place driver, Mike Lichtfeld was a class act and presented the crowd with a great interview and even apologizing for accidentally getting into fellow driver (Johnson) during the race. I believe I speak for all spectators who where in attendance as I issue a huge thank you to all of our Super Late Model drivers for always providing a compelling display of power, sportsmanship and simply good, enjoyable racing!
Posted by Alex Prunty Racing at 10:22 AM