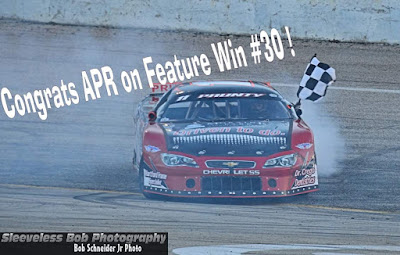 Alex Prunty survived a late race restart to capture the victory in the 40-lap late model feature to score his 30th win at the Slinger Speedway. 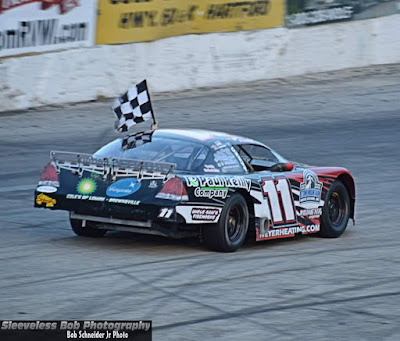 Jack Stern and Jordan DeVoy paced the field the green flag and DeVoy quickly raced out into the early lead. Alex Prunty began to work his way forward from his sixth starting position as he took over the second spot by lap five ahead of Stern, Ricky Heinan, and Kyle Chwala. The action at the front of the field was tight as Dan Jung and Mike Held also advanced to join the lead pack with the top seven cars racing in close quarters. A spin by Corey Funk off turn two while racing amongst the leaders on lap eight produced the first caution flag with DeVoy leading over Prunty, Stern, and Heinan. During the incident Brittiny Helmers made contact with the pit entrance wall in turn two and retired from the event. DeVoy chose the inside groove for the restart and Prunty immediately took to the high side with the choice paying off as he charged into the lead as racing resumed. DeVoy held tough in second while Heinan and Chwala used the inside lane to take over third and fourth with Stern falling back in line in fifth. The race remained steady for a few laps before the caution waved again on lap 14 for a spin by R.J. Braun in turn two. As the leader, Prunty remained committed to the high side and he chose the upper groove, leaving DeVoy the inside while third running Chwala followed in Prunty’s tracks on the top side. Prunty was able to keep the lead as the green flag waved and Chwala used the high lane to pass DeVoy for second. Prunty and Chwala opened up a significant distance on the rest of the field while DeVoy fended off challenges from Dan Jung and Mike Held for third. The comfortable gap enjoyed by Prunty and Chwala was erased on lap 37 when a spin down the backstretch by Braun resulted in the third caution of the event. Prunty and Chwala looked to settle it out on the restart for the final three lap shootout and Prunty quickly charged to the lead. Chwala fell into line directly behind Prunty and made a final challenge on the last lap which fell just short as Prunty took the checkered flag for the victory. Chwala finished second while Jordan DeVoy, Mike Held, and Dan Jung rounded out the top five.

Alex Prunty and Kyle Chwala both turned in the exact fastest qualifying time at 12.292 seconds with Prunty being awarded the fast qualifier honors because he set the time first. 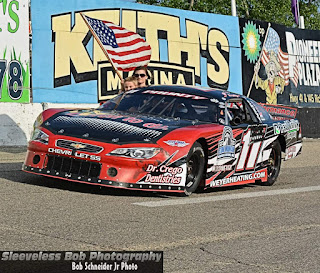