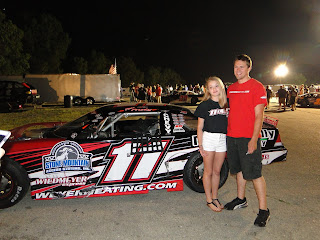 Jack Stern and Kyle Chwala swapped the lead in the opening laps before Chwala was able to edge ahead from the outside while behind them, Ricky Heinan, Alex Papini, Jordan DeVoy, and Alex Prunty all raced hard for position. A spin off the backstretch by Shaun Scheel while racing in traffic produced the caution flag on lap 13 with Chwala leading over Stern. The top three chose the inside lane for the restart while Papini took to the top side and the move paid off as he eased into the lead just before the caution waved again as Jerry Mueller’s car spun off turn two. Papini chose the inside groove for the restart and he maintained the lead as racing resumed while Chwala struggled on the high side allowing Stern to move by for second. Heinan, Prunty, and Mike Held also took advantage of Chwala’s high side struggles and they advanced forward from the inner groove. A few laps later, Prunty worked his way around Heinan for third and began to set his sights on Papini and Stern out front. Prunty also passed Stern for second on the inside shortly thereafter as Papini enjoyed a sizeable lead. The caution waved again on lap 31 and erased Papini’s lead as Grant Griesbach and Tyler Schley tangled in turn four. Papini and Prunty started side by side for the restart and Papini was able to hold onto the lead while behind them Chwala’s struggles in the high lane continued and his car slowed, bunching up the field and the ensuing incident heavily damaged the cars of Mike Held and Stephen Scheel as the caution waved again. Papini held the point on the single file restart but he was unable to get away from Prunty as the two prepared to settle the race amongst the two of them. Prunty closed to Papini’s rear bumper but was unable to make a bid for the lead as Papini drove to the victory. Corey Funk sliced his way forward late in the event to finish a strong third just ahead of Ricky Heinan and Jack Stern in fourth and fifth respectively.