Back to Back Feature Wins in Slinger! #6 on the Season! 
Alex Prunty parlayed a late caution into a feature victory as he passed Al Stippich with five laps to go and captured the victory in the 40-lap late model main event.

Stippich and Corey Funk led the field to the green flag and Stippich charged into the early lead from the outside leaving Funk to battle with Andy Evraets, Tyler James, and Jordan DeVoy. As Stippich began to stretch his lead out front, Alex Prunty and Mike Held began to work their way forward after starting deep in the field. Stippich continued to enjoy a sizeable lead as the laps clicked away while Prunty and Held broke into the top five. By lap 29, Prunty and Held had advanced all the way to second and third respectively while Stippich remained solidly in the lead. Stippich began to catch lapped traffic which allowed Prunty and Held to begin to erase the space between themselves and the leader. Matt Rowe and Andy Evraets got together off turn two on lap 34 which sent Evraets’ car spinning around and drew the caution flag with just six laps remaining as Stippich led Prunty, Held, Corey Funk, and Brian Holtz. As racing was about to resume, Funk appeared to have a right rear tire go down and he spun coming to the green flag, ultimately keeping the field under caution a while longer. On the second attempt, Prunty was on his marks from the outside lane and he entered turn one even with Stippich for the lead. By the time they exited turn two, Prunty edged ahead, completing the pass shortly thereafter. Prunty scooted away in the final laps and drove to the win while Stippich and Held staged an aggressive battle for second of which Stippich prevailed at the finish. Held had to settle for third place while Brian Holtz and Dan Jung rounded out the top five in fourth and fifth respectively. 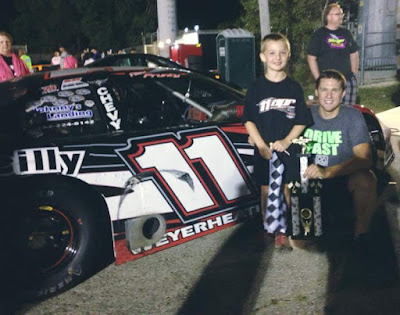 Matt Rowe and Al Stippich were the winners of the late model heat races and Alex Prunty was the fastest qualifier with a lap of 12.270 seconds.
Posted by Alex Prunty Racing at 10:35 AM