After Early Contact With the Wall, Alex Rebounds to Finish 3rd! 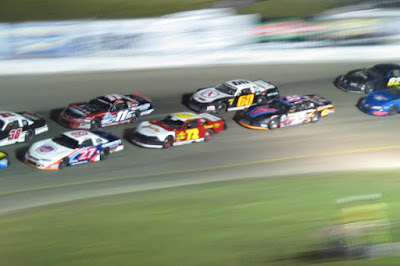 Jordan DeVoy used the outside lane to take the lead from Alex Prunty in the closing laps of the 40-lap late model feature to capture his first career main event victory.

Steven Schulz paced the first eight laps before Al Stippich took over the point with an outside move on a restart following a caution flag on lap nine. Alex Prunty ran down Stippich and grabbed the lead just past the halfway mark while DeVoy also maneuvered his way forward and into third just ahead of Mike Held. DeVoy chose the outside lane on a restart after another caution flag on lap 26 and as racing resumed he was able to outgun Prunty for the lead. Prunty battled door to door with Al Stippich over second while DeVoy extended his lead. DeVoy would not be denied in the closing laps and he drove to his first career feature victory while Stippich beat Prunty for second. Prunty had to settle for third while Jack Stern and Mike Held rounded out the top five.

Late Model heat races were won by Tyler Schley and Steven Schulz and Mike Held was the fastest qualifier at 12.318 seconds.
Posted by Alex Prunty Racing at 7:23 PM