This weekend was the first time Alex have ever raced the Super Late at Slinger. It rained most of the morning, but after practice was done, we looked to be a solid top 10 car borderline top 5. In qualifying, Alex learned from his mistake last week at the Dells, and had a better idea of what this new 10" tire we are now on will do, and just BARELY missed fast time! Fast time was an 11.24, we qualified 6th with a 11.28! Some pretty tight times for the 33 car field!

​
​We were very conservative with adjustments on the car after heat race, because we had never ran a feature at slinger before in this division. The car was a touch tight in the heat race, but we opted to leave it and see what changes as the tires wear. After leading the first 3 laps, the car got too tight for Alex to race for the lead in the bottom, and we just started logging laps. He ran 6th most of the race, and toward the end, he had a little issue with lapped traffic. Ended up 8th. Still not bad for a rookie! We beat A TON of good cars, and had a lot of fun doing so!

We also made the front page of the Milwaukee Journal Sentinel Newspaper! Check it out! http://www.jsonline.com/sports/autoracing/376918351.html

Also, here are highlites from the race!  https://www.youtube.com/watch?v=QdLYvayfGd0&feature=youtu.be


We left for the track Saturday morning, and unloaded really fast. We had practice from 12-6, and that gave us time to try a bunch of new things. Out of the 36 cars there, we ended the day with the 2nd fastest time of the day! I was very excited from the time we unloaded the car, not only because of how fast we were, but because of the competitors we were up against.

Sunday was race day, and we started out by being top 5 in all the practices. Alex continued being very happy with the car. He went into qualifying being very confident we would turn a fast lap and make the show, but unfortunately he made a rookie mistake on his final lap, and lost a little time as the car turned much better than he was anticipating, and he hit the rumple strips causing the car to jump sideways. Still turned a fast lap of a 13.396, but needed a 13.36 to make it into the show. 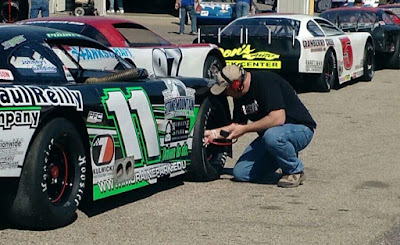 So because we did not make the show in on time, we had to race our way in through the qualifying race, along with several other big name drivers. The top 4 transferred, and we finished 3rd, putting us in the big show! After starting 20th, knowing we had a really good car we slowly started to work our way through the field, and found ourselves in the top 10 at the halfway point of the race, turning the same times as the leaders. Being as hot as it was outside, a lot of cars were having overheating issues, due to several red flags for blown engines.  Just after the half-way point running 9th, both the water temperature and oil temperature gauges pegged hot, and we were forced to pull off to the attention of the pit crew to cool the engine down. Officially finished 14th.

Full Write Up From DRP:


﻿
Andrew Morrissey of Deforest, WI put together a marvelous run after a race long battle with Nascar Truck Series driver Johnny Sauter to capture the 2nd annual Icebreaker 100 Sunday afternoon at The Dells Raceway Park. Morrissey, fresh off his fall victory at the speedway in the Falloween 150 has become the man to beat as he has now held serve in back to back crown jewel races at the speedway against some of the country's top drivers. Morrissey lead the field to green from the pole position with Roscoe, IL standout Austin Nason in hot pursuit. After only a handful of laps the first caution flew for the 2015 Slinger Speedway Champion Steven Apel who had an issue and spun in turn four and lady luck would relegate Apel and his beautiful new Toyota Tundra to the pits for the day. On the restart Morrissey would once again resume the lead with now Johnny Sauter and DRP standout Bobby Kendall filling his mirror. Sauter continued to pressure Morrissey looking for the lead and finally taking the top spot right before the halfway mark just in time to collect the Earnest Performance halfway leader bonus. Sauter would continue to lead with Morrissey in tow until lap 69 when Morrissey would make the winning move and recapture the top spot from Sauter who now had a mirror full of Minnesota two time ARCA Champion Dan Fredrickson, and the 2015 Alan Kulwicki development driver champ Ty Majeski. Fredrickson worked Sauter high and low to take the second spot only to have the two tangle on the next lap sending Fredrickson spinning and collecting 2015 Walbeck Classic winner Jeff Storm who had patiently work his way into the top 5. After the dust settled the field was reset for an eight lap shootout with Morrissey leading the Delaware double file restart to green with Majeski in second followed by 2015 DRP Track Champion Tim Schendel, 2015 Midwest Truck series champ Derek Kraus and Grundy County Speedways finest Eddie Hoffman. Morrissey would be marvelous to the end while Schendel worked his way past Majeski for second with the young star Derek Kraus coming home an impressive fourth in his first Icebreaker performance and Johnny Sauter rounding out the top five.
The 2nd annual ICEBREAKER was a success! Thank you to all of the drivers for putting on a great show, the staff for all of their hard work and the fans for choosing Dells Raceway Park!

Posted by Alex Prunty Racing at 10:31 AM

It’s been a great start to the 2016 race season for 23-year-old Alex Prunty and he hasn’t even taken a green flag yet.  The Lomira, Wisconsin driver was recently named to both the Kulwicki Driver Development Program (KDDP) and the PFC Brakes Team.


“I would say I was optimistic on making one of the two, but to make both is really a huge honor,” Alex Prunty told Speed51.com powered by JEGS.  “I am so grateful to have the support from my family and being selected into the Kulwicki Driver Development Program is the opportunity of a lifetime.  I am honored to carry the legacy of Alan Kulwicki, he was such an inspiration.  We are a small, single car team with a strong will power to do great things with low funding.”


Prunty has seen a lot of success in his Limited Late Model the past few seasons at his home track of Slinger Speedway (WI).  He’s won two championships and tallied 20 wins, which makes him the winningest driver in division history.


While Prunty dabbled in Super Late Model racing last year, the expenses were too much for him to compete competitively on a consistent basis.  Support from the KDDP and #TeamPFC, however, changes that.  Every KDDP driver receives $7,777 to start off their season and they will compete for a grand prize of over $54,000 throughout the season.  Team PFC drivers receive $1,500 of PFC product to use on their race cars.


“Originally I was only planning on running Slinger, and even that was going to be pressing my luck with my funding,” said Prunty.  “With the support of two great organizations as well as all my sponsors, it helps make the tough financial decisions of traveling a little easier.”


Not only does Prunty plans to still race full time and for Rookie of the Year at Slinger Speedway, but he plans to travel more.  He is already registered for the Icebreaker at Dells Raceway Park (WI) in less than two weeks and hopes to add more stops there as well as at Wisconsin International Raceway and possibly a few TUNDRA Super Late Model Series events.


While Prunty is excited to expand his racing for 2016, something he is most excited about is climbing into a Super Late Model on a regular basis.  Over the years Prunty has gotten to watch his uncles, Dennis, Dale and David race successfully at Slinger Speedway, winning three track championships and two Slinger Nationals.  Now he’s excited to add his name to the list.


“Finally having the funding to be able to afford running a full-time Super Late Model schedule in Slinger means the world to me,” said Prunty.  “I’ve been having a lot of flashbacks lately to when I was around 10 years old or so, and sitting in David’s cars bleeding brakes with my dad. It was always my dream for those cars to one day be mine, and now 13 years later, those dreams are coming through and I plan to make the most of every opportunity I have.  I know I am blessed to have such great support and role models throughout my family, as well as financial support.”


Not only will being a part of these programs help financially, but Prunty intends to take full advantage of all they have to offer.  Both programs offer social media support and driver promotion. 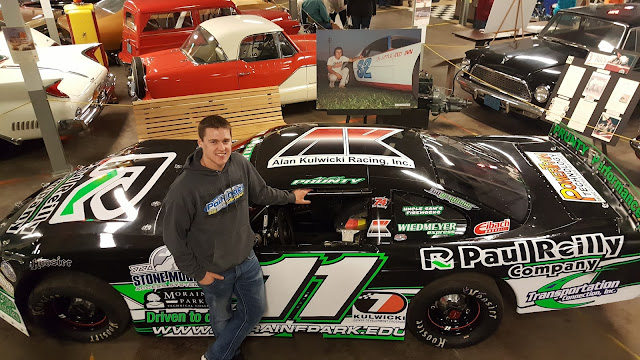 “Being a part of the KDDP will allow me to really branch out both through a little traveling as well as on social media. The PFC sponsorship will help allow me to properly maintain the braking system on my one-car team throughout all the races we have planned this season,” said Prunty.  “The #TeamPFC will also get me extra publicity and help get my name out to the rest of the world.”


While Prunty eyes his first full season behind the wheel of a Super Late Model, his goals are simple.


“I need a win,” said Prunty.  “Last year we started getting my feet wet, running the Super Late at the Dells. It really was a huge year of learning, as I have really been trying hard to understand all the new setup options in the cars with the bumpstop setups. We only ran 10 races, but the amount I learned last year was priceless. I think now we have a better feel for what this car likes, and in turn will be much more consistent.”


Prunty is scheduled to kick off what he hopes to be a busy year during the Icebreaker at Dells Raceway Park on April 17.