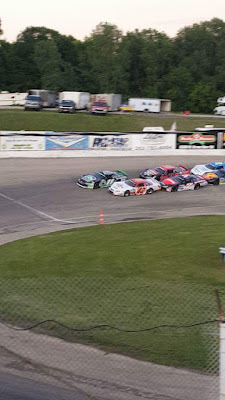 Slinger, Wis., June 26—Still feeling the effects of bruised ribs suffered in a hard crash a little over a week ago, Dennis Prunty toughed out his third super late model feature victory of the season Sunday night in the second round of the Pepsi Challenge Series at the Slinger Super Speedway.

“They’re still sore,” Prunty told the crowd from victory lane, “I was trying to take it easy and not get into any altercations out there.” “I wasn’t sure I wanted to race again,” Prunty continued, describing the thought process of returning to the seat so soon after the crash, “I just thought I would get in the car and take a few laps and see how it goes. I guess I still want to race.”

John DeAngelis Jr. and Mitch McGrath made up the front row at the start of the 60-lap main event and the inside lane advanced quickly as DeAngelis charged to the lead while third place starter Alex Prunty settled into second, leaving McGrath to battle with Grant Griesbach and Brad Mueller for third. DeAngelis paced the opening four laps before Alex Prunty was able to duck inside to take the the top spot as behind them, Dennis Prunty began to slice his way forward through the field. Dennis Prunty used the outside lane to pass by Griesbach and then dove to the inside to get around McGrath before pressuring Mueller for third while Alex Prunty continued to lead over DeAngelis. Dennis Prunty then swept to the inside of Brad Mueller for third place and a few lap later worked the inside again to snag second from DeAngelis. A half spin off turn four by Grant Griesbach on lap 16 drew the first caution flag with Alex Prunty leading over Dennis Prunty, DeAngelis, Mueller, and McGrath. Alex Prunty chose the outside lane for the restart and Dennis Prunty took to the low lane as racing resumed and the two fought alongside each other for the lead. Dennis Prunty’s car turned very well and found grip off the turns which was enough to propel him into the lead off turn two as DeAngelis tried to fill the gap on the inside and challenge Alex Prunty for second. Alex Prunty eventually prevailed over DeAngelis for second but their side by side battle allowed Dennis Prunty to edge away a bit. Behind the top three, last week’s feature winner Chris Blawat and defending track champion Steve Apel joined Mueller and McGrath in a race over the fourth spot. The second caution of the event appeared on lap 31 when Duke Long’s car went for a spin off turn two while racing with Rob Braun. Braun took the blame for the incident and “tapped out” allowing Long to regain his spot as the field lined up for a restart. This time, Dennis Prunty chose the outside and left the inside lane for Alex Prunty and as the green flag waved, Dennis raced into the lead while Alex had his hands full with DeAngelis and Blawat for third. Blawat was the driver on the move in the second half of the race as he used the outside to bypass both DeAngelis and Alex Prunty to advance to second place attempt to track down Dennis Prunty for the lead. The best battle on the speedway in the closing laps was over the fifth position between Mitch McGrath and Steve Apel as Apel handily worked over McGrath’s rear bumper. Dennis Prunty would not be denied in the waning circuits and he drove to his third super late model feature win of the season while Blawat had to settle for a strong second place run the checkered flag. Alex Prunty finished a solid third and John DeAngelis was fourth while Steve Apel won the battle with Mitch McGrath to finish fifth. Brad Mueller crossed the finish line in seventh ahead of Nick Wagner and Ryan DeStefano in eighth and ninth respectively while Duke Long finished tenth.

James Swan won the 30-lap super late model semi-feature as Lowell Bennett, Fred Winn, and Jerry Mueller rounded out the top four finishers who all advanced to the main event. Dalton Zehr finished fifth ahead of Jerry Eckhardt in sixth. Super late model heat races were won by Dalton Zehr, Ryan DeStefano, and Brad Mueller and Chris Blawat was the fastest qualifier after posting a lap in 11.344 seconds. 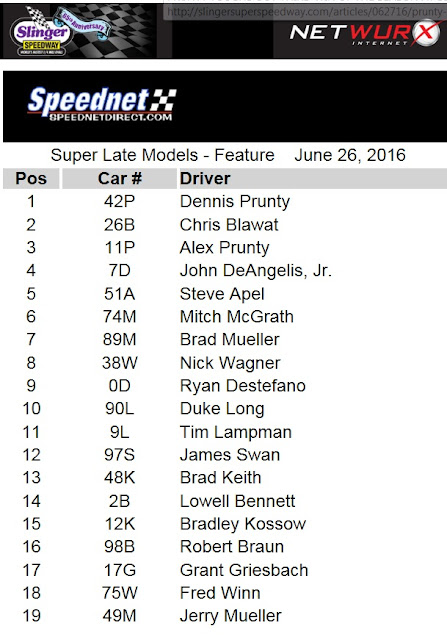 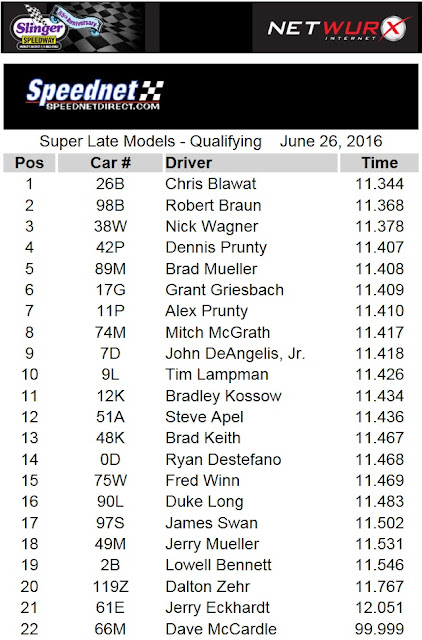