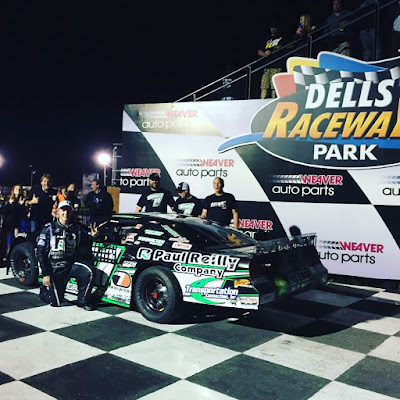 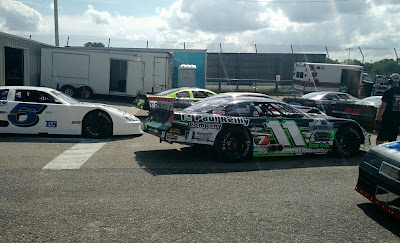 Nascar Truck Series driver Johnny Sauter came home to Dells Raceway Park on his weekend off to where it all began for him and captured his first feature win ever at the speedway in the Armed Forces Night Memorial 50. Sauter said in an interview with track announcer Todd Behling afterwards, this feels really good, the Dells is where it all began for me, DRP is the first place where I ever wheeled a race car and I never won a feature here before tonight. Earlier in the evening Sauter won the Assembly Products Dash, a 10 car 15 lap positioning race for the feature. Sauter started the race from the fifth row and really hustled the car to the front in a hurry to grap the $500 bonus money put up by CEO of Assembly Products Inc Ed Szelagowski Sr. in honor of Armed Forces Night & All Who Served this Great Country ! Szelagowski said he wanted to create a new level of excitement for the drivers and fans in a short race where you have to go now and it was a pleasure to see such a fantastic race and an honor to write the check to such a hard charger as Johnny Sauter.

With the feature events first five rows set by the finish of the Assembly Products Dash it was time to go racing and the front row had a pair of fives bring the field to green, Johhny Sauter and Jeremy Miller and it was Miller with the early lead. Sauter, who had yet to win a feature event at the place he called home was not going to be denied as nosed his way back to the front and by lap five it was Sauter, Miller, Mark Eswein, Tim Schendel and Alex Prunty. A couple spins brought out the caution near the midway point but on the restarts Sauter looked stong an took command of the race leaving the battle for second by the midway point of the race between Miller, Prunty, John DeAngelis Jr and Schendel. In the end it was Johnny Sauter collecting his first ever feature win at the speedway with Alex Prunty a 2016 Alan Kulwicki Development Driver Candidate finishing a strong second, followed by Jeremy Miller, Tim Schendel and John DeAngelis Jr rounding out the top five. In Earlier events it was Tim Schendel setting fast time with Sauter picking up the Dash and heat winners were Jeff Storm and Brad Kossow. Mike Lichtfeld picked up the B-Main event follwed by Corey Jankowski, Keith Tolf and Mike Breiner all earning transfer spots to the A-Main. Mark Simonsen from Crystal Lake, IL was involved in a very scary crash in the Super Late Model B-Main and Mark was transported UW Madison Hospital where he is stable & resting after surgery for a hole in aorta, broken back & ribs, and a collapsed lung. Please keep Mark in your Prayers for a speedy & complete recovery. Thank You to all the drivers, teams and fans who braved the threat of rain in the area to come out and see a great night of racing at your very own Dells Raceway Park. 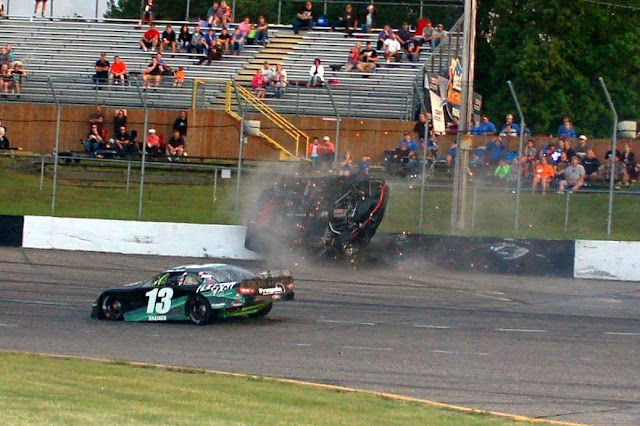