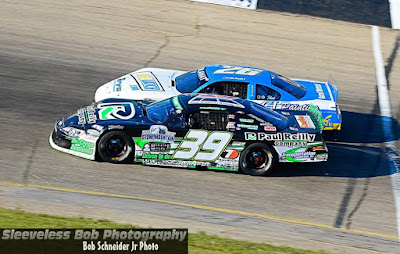 Video Highlights:  https://www.youtube.com/watch?v=cYPhbj-MXRo
After battling for 2nd near halfway, RF suspension damage after a hard fought battle with Steve Apel for 2nd would slow Alex to an 11th place Finish.

Slinger, Wis., June 19—For the second time in three weeks Chris Blawat found himself in victory lane at the Slinger Super Speedway after the 60-lap super late model feature Sunday night.
“That car was awesome, it’s the kind of car you dream of driving, “ Blawat told the crowd afterward, “We’re having a good year here and we’ll take it.” 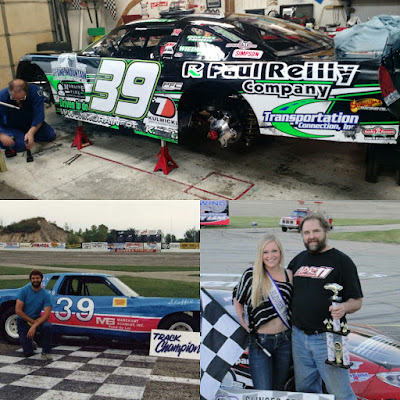 Grant Griesbach and Steve Apel paced the field to the green flag and Apel quickly jumped to the early lead from the outside leaving Griesbach to battle alongside Nick Wagner for second with Chris Blawat and Alex Prunty directly behind them. As Apel began to inch away, Wagner eventually took over the second spot with an outside pass on Griesbach and Blawat followed a few laps later, making a similar move on the high side to move into third. Prunty also worked his way around Griesbach and into fourth while Rob Braun began to challenge the top five as well. Apel maintained his lead while Blawat tracked down Wagner and slipped by on the inside for second just before the first caution flag waved on lap 13 when Duke Long and Mitch McGrath tangled in turn one. Apel chose the outside lane for the restart and as the green flag waved, Blawat was able to stay alongside his door through the turn from the inside groove and was able to wrestle the lead away on lap 15. Apel slid back in line behind Blawat in second while Alex Prunty charged by Wagner on the outside for third. Prunty then tracked down Apel for second and made numerous attempts to maneuver to the inside after Apel’s car washed slightly off the turns. Prunty nudged his way alongside off turn two on lap 33 but Apel held him tight from the outside and would not allow Prunty to complete the pass. On lap 36 Prunty once again dove to the inside of Apel entering turn one but as he exited turn two, the upward momentum from Prunty’s car combined with Apel turning left to line up the backstretch made for a tight squeeze off the corner and the back end of Prunty’s car looped around and he slid down the backstretch as the caution flag waved for the second time. Blawat chose the inside lane for the restart and Apel hung tough from the outside as he barely led the first lap back under green but Blawat was strong as well and he reclaimed the top spot a lap later. Behind the top two, Rob Braun moved into third place as Nick Wagner washed high through turns three and four before eventually looping around to draw the third caution flag on lap 38. Once again Blawat took to the bottom for the restart and Apel again was able to challenge from the top side as racing resumed. Apel again paced the first two laps back under green and just as before Blawat gradually worked the low side to reclaim the lead on lap 39. Rob Braun and Brad Keith began to battle over the third spot while James Swan and Ryan DeStefano joined the top five. Braun prevailed in the battle for third and then tracked down Apel for second, working him over until he was able to race by on the inside. Once into second, Braun began to slice into Blawat’s lead as the laps began to click away. Suddenly with three laps to go, Braun dropped his car to the apron and came to a halt in the infield, leaving Blawat with a sizeable lead over Apel and Brad Keith. Blawat charged to his second feature victory in three weeks as Apel finished in the runner up slot for the second consecutive week. Brad Keith finished a strong third while Ryan DeStefano and James Swan rounded out the top five. Fred Winn finished in sixth place and Grant Griesbach was seventh. Lowell Bennett crossed the finish line in eighth place while Travis Dassow and Tim Lampman completed the top ten.


Lowell Bennett, John DeAngelis Jr., and Steve Apel all were super late model heat race winners and Travis Dassow was the fastest qualifier after circling the speedway in 11.295 seconds. 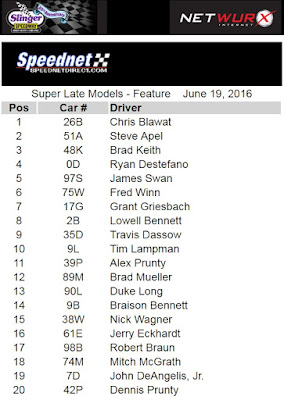 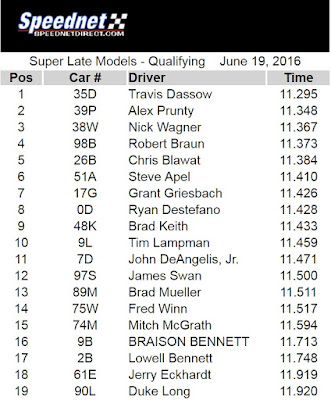