Another 2nd Place SLM Finish in Slinger, the Streak is up to 3 in a Row for the Rookie!

After starting deep in the field of the extremely competitive Slinger field, Alex was able to make his way from 14th to 2nd in just 75 laps! This being Alex's 3rd straight 2nd place finish in the Super Late Model!

South Eastern Wisconsin Short Track Hall of Famer Conrad Morgan notched yet another win in his impressive career as he drove to victory in the E.H. Wolf and Sons Memorial Day 75-lap super late model feature Sunday night at the Singer Super Speedway.

After taking the lead near the halfway mark, Morgan held off a hard charging Alex Prunty his first super late model feature victory of the season while for Prunty, it was the super late model rookie’s second consecutive runner-up finish.

Ryan DeStefano and Fred Winn brought the field to the green flag with Nick Wagner and Mitch McGrath behind them and all spent time near the front of the field as caution flags slowed the action on lap seven and lap 22. DeStefano was out front following the lap 22 slow-down over Conrad Morgan, Gary LaMonte, and Alex Prunty, while Dennis Prunty, Jeff Holtz, and Steve Apel lurked close behind. DeStefano paced the event until just before halfway when Morgan made his move to take the lead while Alex Prunty and Holtz moved into third and fourth respectively as Dennis Prunty, Apel, and LaMonte battled for fifth place behind them. Hard racing between Dennis Prunty and Apel on lap 35 drew another caution flag and both took the restart from the rear of the field, leaving DeStefano out front over Morgan, Alex Prunty, and Holtz. Morgan went to work on the restart and a lap later, grabbed the lead on lap 36 while Apel and Dennis Prunty began to work their way forward again. With Morgan out front over Alex Prunty, Holtz was able to take third place from DeStefano who faded a bit as Apel, Dennis Prunty, and LaMonte all were able to get by for position. Morgan would not be denied in the final laps and he drove under the checkered flag to take the victory, leaving Alex Prunty to settle for second place for the second consecutive week. Jeff Holtz advanced from deep in the field to finish third while Steve Apel and Dennis Prunty rounded out the top five. Gary LaMonte finished in sixth place ahead of Ryan DeStefano and John DeAngelis Jr. in seventh and eighth respectively while Grant Griesbach and Brad Keith completed the top ten finishers. 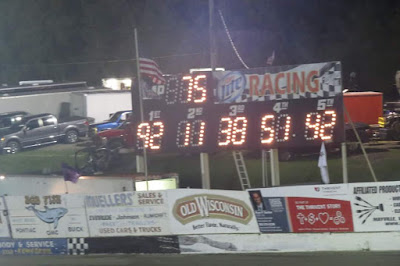 Posted by Alex Prunty Racing at 10:30 AM