12th to 4th in Final Event Before Slinger Nationals! 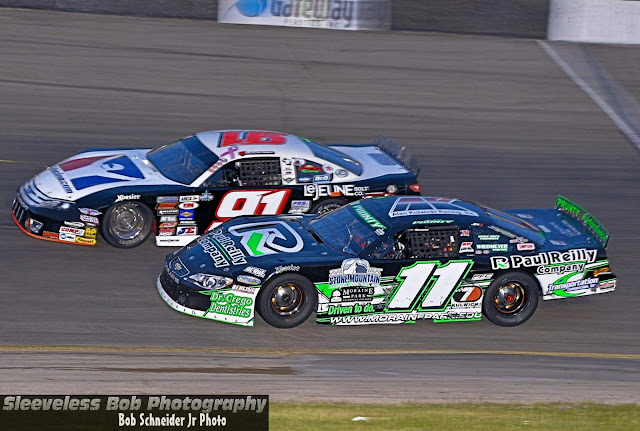 Slinger, Wis., July 10--—Rob Braun outdueled Dennis Prunty following a restart with 20 laps to go and drove to his second super late model feature victory of the season Sunday night at the Slinger Super Speedway in the 60-lap main event.


“There’s so much horsepower in the pits here tonight with Mark Feiler, Toby Nuttleman, and Jon Reynolds Sr,” Braun told the crowd from victory lane as he touched on the star studded crew chiefs who were on hand to help their drivers as they prepared for the upcoming Slinger Nationals, “I was chatting it up with them and picking their brains earlier and the next thing you know, I found a little speed…it was awesome!”


Brad Keith and Brad Mueller paced the field to the green flag with Mueller charging to the early lead from the outside groove and Rob Braun also using a strong outside run to nail down second place. Keith and Chris Blawat ran nose to tail on the inside in third and fourth respectively while Ty Majeski and Dennis Prunty raced for fifth place in their tire tracks. On lap four Keith’s car swung wide off turn four directly in front of Blawat and he caught it but as they entered turn one, his car kicked loose again and went into a long slide through the corner after very slight contact from Blawat before ending up in the infield off the backstretch to draw the first caution flag. Mueller chose the outside groove and Braun went to the low lane while Dennis Prunty and Majeski each chose the high side which opened up the inside line for Jamie Wallace and Gary LaMonte as the field formed for the restart. Mueller and Braun intensely raced for the lead as racing resumed with Mueller holding tough on the outside and Braun gritting it out from the low lane. Mueller eventually began to fade up top and Braun took command as Prunty quickly filled the gap to take second. Wallace and LaMonte also got around Mueller who continued to lose ground in the outside lane while Alex Prunty and Majeski began to challenge for the top five. On lap 13, Mueller had power steering issues and he dropped from competition as the resulting fluid on the racetrack produced the caution flag with Braun leading over Dennis Prunty, Wallace, LaMonte, Alex Prunty, and Majeski. Braun and Prunty leaned on each other for the lead as racing resumed while LaMonte and Majeski remained in their tracks as Alex Prunty, Jamie Wallace, and John DeAngelis Jr. all battled for the fifth spot. Dennis Prunty eventually worked outside lane hard enough to take the lead from Braun on lap 18 and the field settled into single file formation during the middle stages of the race. Dennis Prunty maintained the lead out front over Braun while LaMonte held third solidly and Alex Prunty and Wallace advanced forward when Majeski left the speedway on lap 38 and retired from the event. Tim Lampman’s car looped around in turn one on lap 40 while racing in front of Randy Schuler and the caution flag appeared for a third time. Dennis Prunty chose the outside lane with Braun taking to the low side and as racing resumed, they both renewed their side by side battle for the top spot with LaMonte, Alex Prunty, DeAngelis, and Wallace all racing hard behind them. After several laps of door to door racing, Braun prevailed on the inside and Dennis Prunty slid in behind him in an attempt to make another late charge at the lead. Braun would not be denied over the closing laps and he captured his second super late model feature victory of the season over Dennis Prunty and Gary LaMonte. Alex Prunty finished fourth and John DeAngelis Jr. was fifth. Mitch McGrath turned in one of his strongest performances of the season to finish sixth ahead of Jamie Wallace and Steve Apel, who drove Travis Dassow’s machine to an eighth place finish after experiencing engine issues with his own car after the heat races. Brad Keith and Chris Blawat rounded out the top ten finishers.

Sunday night was our last Super Late Model Show before the prestigious $10,000 to win Slinger Nationals, by far our biggest race of the year! We have off this Sunday, so we will spend this week going through and rebuilding everything on the car preparing for the Nationals. Anything and everything will be looked over, including new valve springs and rocker arm inspections, to rear end inspection and rebuild, and everything in-between! Want to make sure the car is 100% ready to go!! 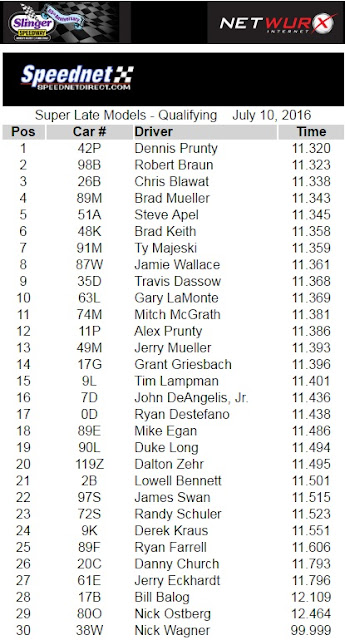 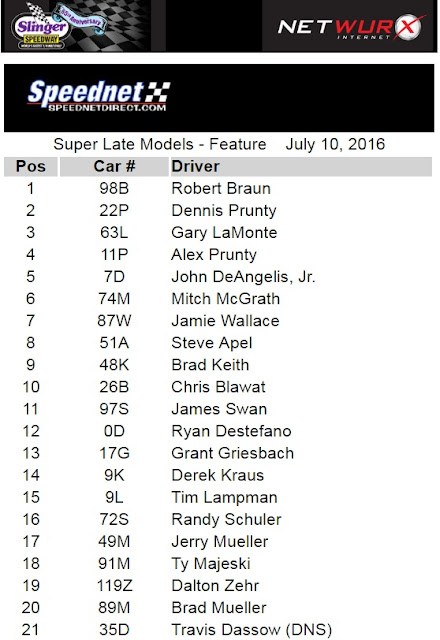 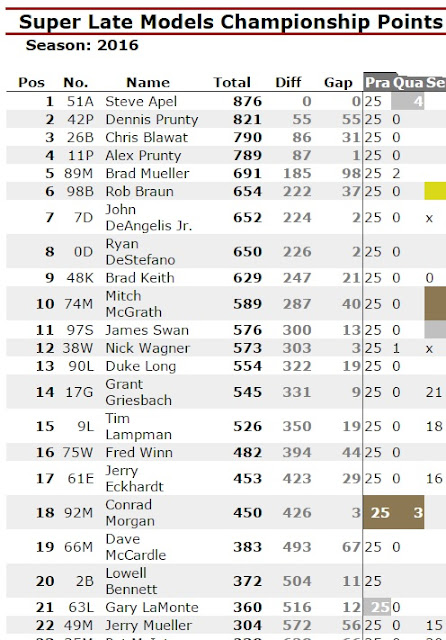 Posted by Alex Prunty Racing at 10:24 AM