Alex Makes It Back2Back Wins, Wins 1st Feature at Slinger in a SLM! 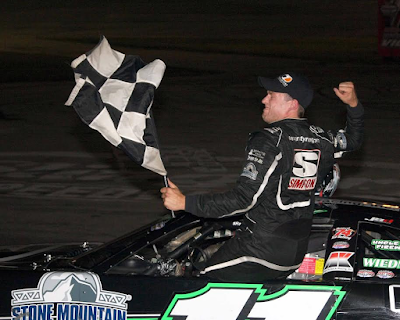 “This car was just awesome tonight,” Prunty exclaimed as he exchanged high-fives with the crowd gathered around victory lane, “We work so hard on this car and we’re just a one car team to run the Dells last night and win there and then get up early this morning , and get the car switched over, it’s just an incredible feeling to be here.”
“There are just so many people with the Kulwicki program behind me to make this all possible, “ continued Prunty, who also won the night before in the Wisconsin Dells, “I’m just shaking I’m so happy.” 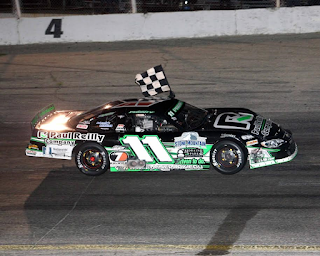 Travis Dassow led the field to the green flag and paced the opening laps as fellow front row starter Prunty dropped in line behind him in second just ahead of Nick Wagner, Steve Apel, and Rob Braun. The top two ran single file for a few laps while Apel worked the high side to pass Wagner for third, leaving him to battle Rob Braun and Gary LaMonte over fourth with Chris Blawat and Brad Mueller lurking close behind. On lap four, Prunty dove to the inside of Dassow exiting turn four and competed the pass for the lead, stretching his advantage as Apel worked over Dassow for second. As Prunty edged ahead, Apel took to the inside lane to take second from Dassow while behind them Braun, Blawat, and LaMonte occupied the fourth through sixth spots. Prunty began to work lapped traffic with Apel attempting to close in as Blawat caught and passed Dassow for third. Prunty methodically picked his way through the lapped traffic and never allowed Apel to close to more than a few car lengths as the driver on the move in the closing laps was LaMonte who slipped by Blawat for third. Prunty was never headed as the race ran caution free and he took the checkered flag ahead of Steve Apel for his first career super late model feature victory at the Slinger Super Speedway. Gary LaMonte finished in third while Chris Blawat crossed the finish line in fourth and Travis Dassow was fifth. Rob Braun took the checkered flag in sixth place ahead of Brad Mueller and Nick Wagner while Ryan DeStefano and James Swan rounded out the top ten. 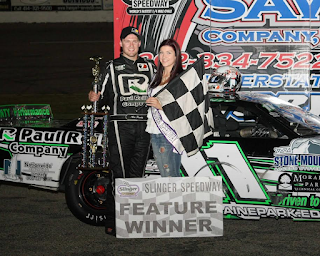