“This season has been a lot of fun and this car has been awesome all year,” Blawat told the fans from victory lane, “It’s good to get a win and we’ll take it from here.”


“I thought we were pretty close together and as the leader I set the pace,” Blawat continued, explaining his version of several aborted late race restarts between himself and the second place finisher Alex Prunty, “It is what it is, I guess.”


“We were just slipping and sliding and Chris (Blawat) was doing the same thing and it was just a matter of getting hooked up, I don’t think there was gamesmanship going on there,” Prunty stated, echoing Blawat’s explanation of the restart attempts, “I was trying to get some from him and he was trying to get some from me and it just is what it is.”


Rob Braun and Chris Blawat paced the field to the green flag and Braun led the opening two laps before Blawat powered by on the outside for the lead on lap three. Alex Prunty advanced to challenge Braun for second and after a few laps was able to ease alongside using the bottom of the speedway to take the position. Dennis Prunty took advantage of the inside gap Alex Prunty opened and he moved by Braun for third. Steve Apel followed suit and also used the low line to advance past Braun who settled back in line in fifth. Drivers racing for position around mid-pack created an accordion like situation which sent Grant Griesbach sliding off turn four and into the infield as the race remained green with Blawat leading over Alex Prunty, Dennis Prunty, Steve Apel, and Rob Braun. Dave McCardle’s car developed problems entering turn one on lap 23 and he exited the speedway trailing fluid which produced the first caution flag. Blawat chose the high side for the restart and he was able to hang onto the lead despite numerous challenges on the inside from Alex Prunty. Dennis Prunty followed Blawat in the outside lane and eventually was able to power by Alex Prunty for second while Steve Apel and Rob Braun remained in fourth and fifth respectively. Brady Bennett’s spun car off turn two on lap 29 drew another caution flag just before the halfway point. 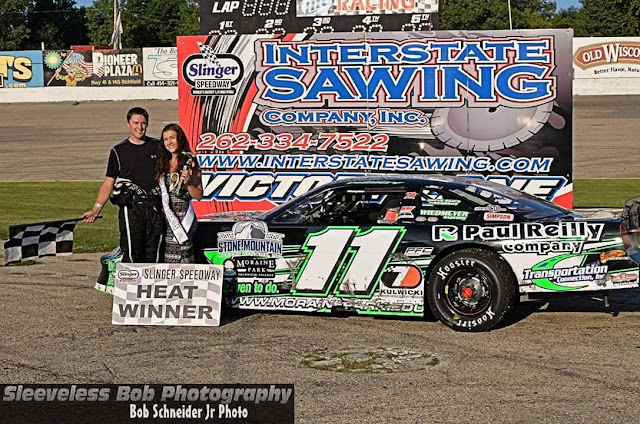 Blawat was quick on the button for the restart but Dennis Prunty was on top of his game as well and he swept into the lead from the inside one lap after racing resumed. Steve Apel also got around Alex Prunty for third as Dennis Prunty slightly stretched his lead over Blawat. Alex Prunty went back to work on Apel for third and after several peeks to the inside, took to the high line to make the pass as the laps began to wind down. The front runners settled down a bit and the best battle on the speedway was in the back half of the top ten as John DeAngelis Jr. and Brad Mueller wrestled for the eighth position. After several laps of hard racing, contact between the cars sent Mueller’s car looping around off turn four and the caution flag waved with just six laps remaining.


Dennis Prunty chose the inside lane for the restart, leaving Blawat the high side and the two raced door to door as the green flag appeared. Prunty’s car skated a bit loose off the turns and upon exiting turn four he drifted wide and rubbed the side of Blawat’s car before sliding into the infield towards turn one as the caution waved once again. Dennis Prunty took responsibility for the incident, which allowed Blawat to inherit the lead over Alex Prunty, Steve Apel, and Rob Braun with now five laps to go. After three aborted restarts, the race resumed on the fourth try and Blawat maintained the lead only to have the caution wave again when Tim Lampman spun in turn two after having the right rear tire go flat. Blawat and Prunty only needed one attempt to get the restart right this time and they charged into turn one side by side in a five lap battle for the win. Prunty was able to hang tough alongside in the low groove but Blawat proved to be too strong exiting the turns and he powered ahead from the outside. Blawat drove to his third super late model feature victory of the season while Alex Prunty had to settle for second. Steve Apel finished third while Ryan DeStefano edged Rob Braun for the fourth spot by inches at the line. 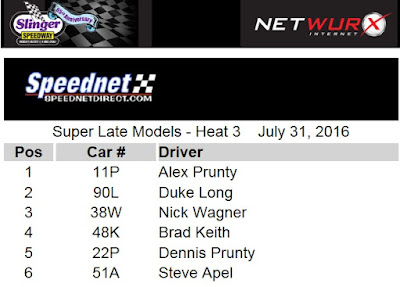 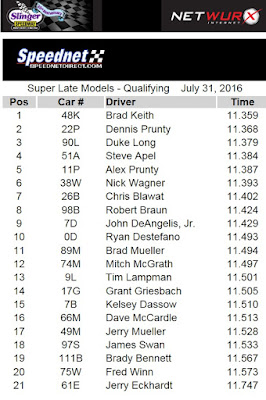 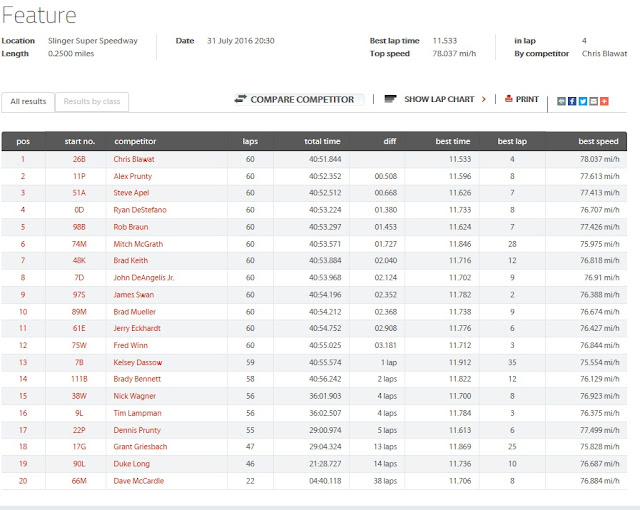