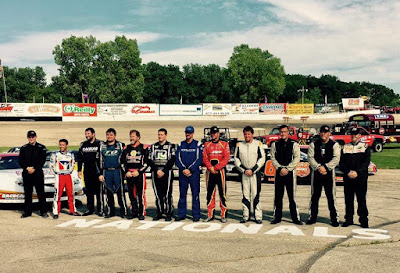 Slinger, Wis., July 18—A year ago Bubba Pollard nearly packed up for an early exit from the Slinger Super Speedway after a not so stellar performance in the SuperSeal Slinger Nationals. Fast forward 365 days later and there was Pollard standing proud in victory lane after holding off Alex Prunty to win the 2017 version of Wisconsin’s most prestigious super late model race.

“I’m out of breath, I ain’t gonna lie,” the Georgia native told the crowd after capturing his first Slinger Nationals victory, “Those guys were good and I knew we had a good race car and we made some changes during the break that helped the car tremendously.”

“We struggled here last year and everybody wanted to count me out up here in the Midwest and I’ve been thinking about it for 365 days,” Pollard continued reflecting on his misfortunes of a year ago, “I got embarrassed last year and I had to make it up this year. And I’m coming back and I really like racing up here because I like these fans here. This is what it is all about.”

Pollard’s race almost took a turn for the worse on lap 169 when he spun in front of the field following contact with Ty Majeski while racing for the lead. Fortunately Pollard didn’t hit anything and no one hit him as Majeski ‘tapped out” following the incident, essentially accepting full blame and allowing Pollard to keep his spot at the front of the field.

From there, Pollard held off a hard charging Alex Prunty to capture the victory while Majeski rebounded to battle Steve Apel for third on the final lap with Apel prevailing at the checkered flag. Brad Keith finished fifth. 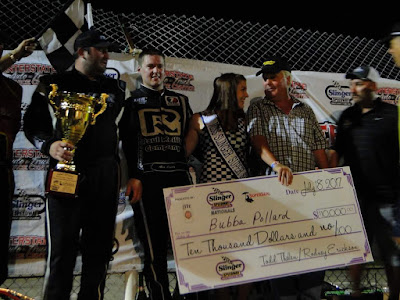 “I tell you what, my team never gave up and it’s a family effort and the last three weeks have been so rough,” Alex Prunty stated after coming home in the runner-up spot for his best career finish in the Slinger Nationals, “There was nothing but overwhelming support tonight and I can’t be more grateful for that. With fifty laps to go I lost power steering and I can’t move my arms so right now I’m just happy to get out of here with second place.”

“The car was really good the first one hundred laps and we didn’t really make any changes,” third place Steve Apel said after leading 82 of the first 100 laps of the race and the most of the event, “The second hundred the car just went away and got tight so I was just able to hang on for a top three.”
“Obviously I’m a little frustrated at myself because we had a second or third place car tonight, “Ty Majeski stated after his fourth place finish, “I made the car not to make any adjustments at the break as I thought it was good enough. I thought we were free but I think we needed to take a little bit bigger swing at it. Overall it was a good run”

“He (Pollard) runs a pretty high entry which it’s my responsibility to recognize that,” Majeski continued explaining the lap 169 incident with Pollard, “I thought he gave me the bottom and I got inside of him and unfortunately spun him out. It was something I obviously didn’t want to do so I tapped out. He had the better car and did a great job tonight. I have nothing to complain about and we will move on to the next one.” 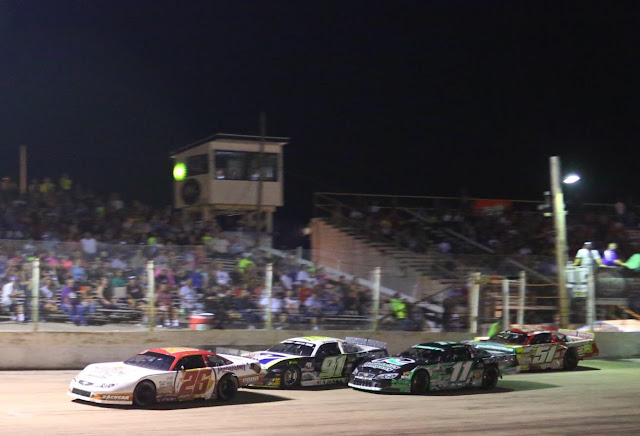 “I know the car would race good tonight as it has raced pretty good the last four or five weeks,” Brad Keith said following his best finish in the Slinger Nationals, “We started back in fourteenth or fifteenth and made it back up to fifth at the end.”
Posted by Alex Prunty Racing at 10:29 AM