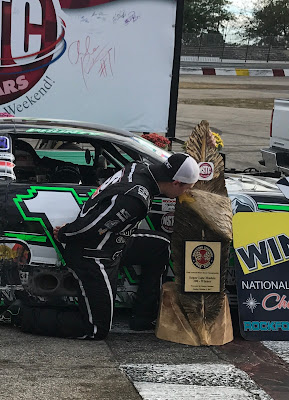 By: Eric Huenefeld
24 year old Alex Prunty was always a step ahead of the rest Sunday afternoon at Rockford Speedway.
The Lomira Wisconsin native led all 200 laps of the 52nd Annual National Short Track Championship (NSTC) Super Late Model race presented by Stanley Steemer, jumping to the lead from his outside front row starting position and never looking back en route to the biggest victory of his young career.
The front of the field was the place to be during the 2017 version of the 200 lap race, with eight yellow flags slowing the pace, including two red flags. The most notable of the yellow flags waved on lap 112, when LPT Auto ‘Faster Than a Speeding Bullet’ Award winner Austin Nason and Brian Johnson Jr got together in the first corner while racing inside the top five. When both Johnson and Nason collected each other, they also collected contenders Dennis Prunty and Michael Bilderback. All four drivers would eventually retire from the race.
Even with multiple incidents which affected contender after contender, the final 63 laps of the 200 lap event ran without a stoppage. 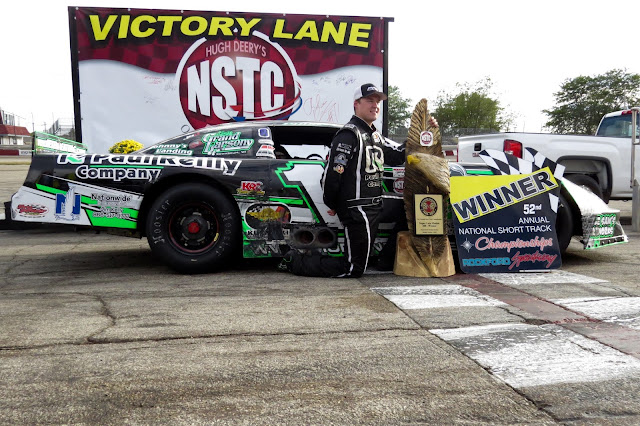 Alex Prunty won the race by a margin of 1.892 seconds and collected a total of $7,100 for his efforts. He becomes the fourth youngest winner in the history of the 52 year old event. NASCAR Hall of Famer Mark Martin was 17 years old when he won the 1977 National Short Track Championship, while 1989 winner Tim Fedewa was 22 years old. Short track racing legend Dick Trickle won the first ever NSTC at age 24, nearly three weeks before his 25th birthday, while Prunty turns 25 next week. 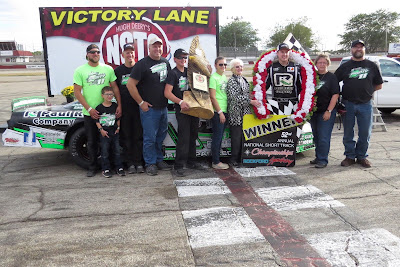 The rest of the top finishers in the 200 lap race featured several tales of survival, starting with runner up finisher Rob Braun, who climbed from his 14th starting position to claim second place. 2015 National Short Track Champion Jon Reynolds Jr suffered moderate right rear damage to his car during the first yellow of the race on lap 7, following a collision with Chris Blawat and then received a one-lap penalty early in the race’s second half, only to fight back and finish on the lead lap in third position.
2015 Rockford Speedway Track Champion Jake Gille was the race’s “Hard Charger,’ starting dead last in the 22 car starting field while climbing as high as second place, before settling for fourth in the final running order. 2009 National Short Track Champion Josh Nelms ran a steady race and was rewarded with a top five finish. 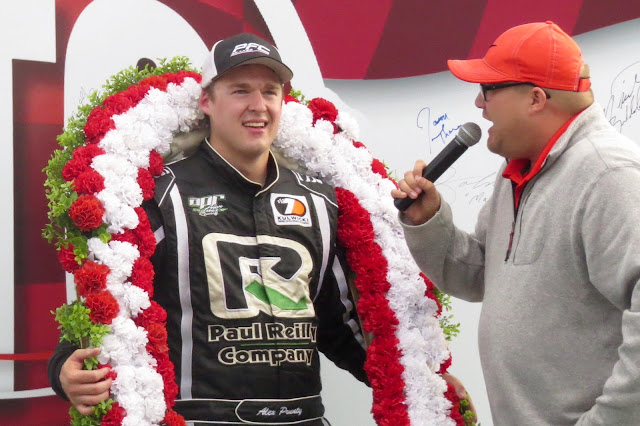 Ten of the twenty-two drivers who started the race crossed the finish line at the end of 200 laps.