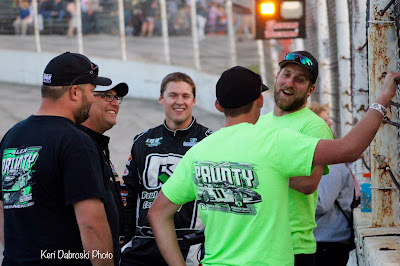 
John DeAngelis and Conrad Morgan led the field to the green and they battled side by side for the lead for the opening lap before Morgan edged ahead from the outside groove. Chris Blawat also used the outside to advance into second place while Alex Prunty, and Gary LaMonte battled DeAngelis for third. While Blawat began to track down Morgan out front, Alex Prunty and LaMonte worked their way around DeAngelis and into third and fourth respectively while Grant Griesbach and Dennis Prunty battled just outside the top five. Blawat was able to use the inside lane to sweep by Morgan for the lead on lap 14 just before the first caution flag waved on lap 15 when Tim Lampman had a tire go down which forced him into the turn one wall. Blawat chose the outside lane for the restart and maintained the top spot while Alex Prunty, Gary LaMonte, and Dennis Prunty all were able to advance forward and drop Morgan back to fifth. Following a quick caution on lap 22 when John DeAngelis experienced problems and stopped in turn two, Alex Prunty closed in on Blawat for the lead and was able to pass by to take the top spot on lap 24 while Dennis Prunty and LaMonte remained door to door right behind the top two. Alex Prunty was able to fend off any challenges Blawat tried from the outside but in the process, opened up the inside lane and Dennis Prunty took advantage as he grabbed the lead on lap 28. LaMonte followed Dennis Prunty on the inside and a few laps later was able to wrestle second place from Alex Prunty. LaMonte whittled away Dennis Prunty’s lead during the second half of the race and with fifteen laps to go was right on Prunty’s rear bumper. LaMonte let Prunty know he was there as he applied a few bumper taps as Prunty’s car swung loose off the turns but each time Prunty was able to power off the corner just enough to maintain the lead. The leaders worked lapped traffic over the final laps as Dennis Prunty held off LaMonte’s challenges and he drove to his fourth super late model feature victory of the season. Alex Prunty finished a strong third while Brad Kossow finished a very respectable fourth after starting at the back of the field. Chric Blawat finished fifth. 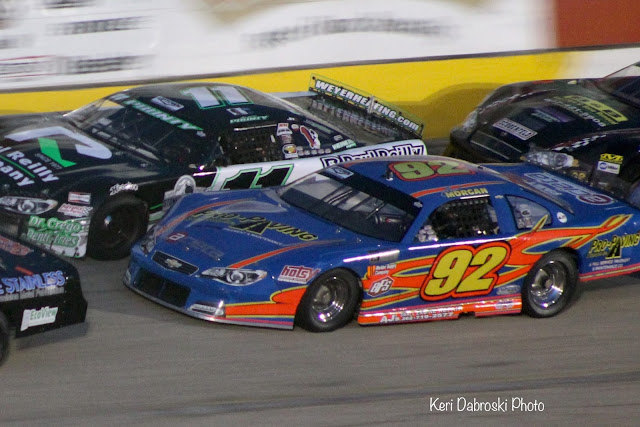