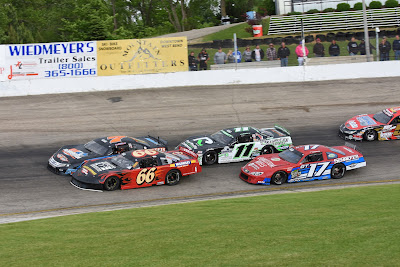 Slinger, WI) Sunday night, September 2 will be the final night race of the 2018 season at the Slinger Super Speedway and will likely usher in a new super late model champion. Keith’s Marina presents the Labor Day Special. The program features a 100-lap main event for the super late models and will serve as the championship night for the track’s premier division.


The super late models will be joined on Sunday night by a full program for the late models, area sportsman, Slinger bee’s, figure 8’s and one-on-one spectator races.


“We’ll treat this race no differently than any of our other races this season,” stated Alex Prunty. “Capping the season off with a win would be an explanation point on a great season. We’re expecting a great field of cars and look forward to an excellent crowd.”


The night will also feature a new class of Wall of Fame inductees. Five personalities that added to the over 70 year history of Slinger Speedway will be honored at intermission. As part of the Wall of Fame ceremony, any former Slinger Speedway racer is encouraged to register for free admission.


Rain last week forced the Memorial Go-Kart event to be added to the Sunday, September 2 race day. The Go-Karts will run their program in the afternoon with the charities fundraiser and Balloons to Heaven launch scheduled to take place as part of the night race program.


Championships will be decided in all the remaining divisions, when the track brings down the curtain on its 2018 campaign, Sunday afternoon, September 9.


Slinger Speedway is located off of Highways 41 and 144 at 280 Cedar Creek Road in Slinger, WI. For more information on upcoming events visit our web site at www.slingersuperspeedway.com or call the track office at 262-644-5921.
Posted by Alex Prunty Racing at 12:36 PM 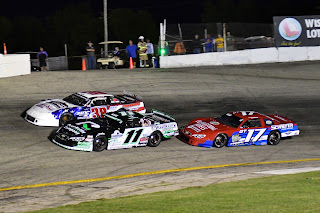 Slinger, Wis., Aug 19- Dennis Prunty drove to victory in the 60-lap super late model feature Sunday night at the Slinger Super Speedway in the third and final round of the Triple Challenge while Alex Prunty was the overall Triple Challenge winner.

“I thought of something all week, “ Prunty continued, “And I did something for the long runs and I think it works but it didn’t work in qualifying and it doesn’t work for the short runs, so we’ll after to figure out what we need to change.” 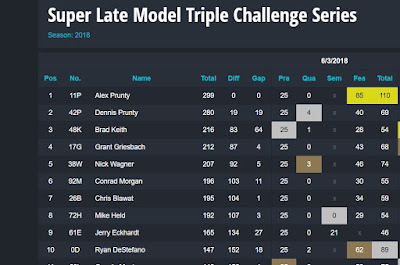 “I had a pretty good car tonight and I just burned it off a bit too much too early there on some restarts, “Alex Prunty said after surviving hard fought battles with Brad Keith and Chris Blawat to bring home a second place result.

“The bottom was just too slippery and I needed the outside and on that last restart he (Dennis Prunty) saw it, “Prunty explained after his second place finish netted him the Triple Challenge championship, “I got a run up top but it was just one of those deals where the top was hard to beat and we’ll just get them next week. It’s the first time I won the Triple Challenge and it really means a lot to me.”

Brad Keith became caught up in an early incident and then drove through the field to briefly run second before settling for a strong third place result at the finish.

“The car was really good tonight and we’ve been kind of struggling in race trim here, “Keith told the crowd afterwards, “It’s been qualifying really great and this week we took a big swing at it right before the feature and that think really came alive at the end.”

Chris Blawat battled with the front runners all race long and briefly challenged for the lead before finishing in fourth place and Nick Wagner racked up another top five result in fifth. Conrad Morgan finished sixth followed by Mike Held and Grant Griesbach in seventh and eighth respectively while David Prunty and Rich Loch completed the top ten finishers.